Nanba Prison is a high-security prison home to some of the most dangerous criminals and talented escape artists. It is characterized by its state-of-the-art, high-tech security systems and an array of talented guards recruited from around the world, giving the prison a reputation as the best in the world.[1] As such, it is believed that not a single inmate has escaped, though there is one known exception who is kept a secret from the public.[2]

Nanba Prison is located in a remote, artificial island in a classified location in Japan. It is a large prison that contains fifteen buildings in total, including headquarters, a general reception area and thirteen buildings for inmate confinement. Upon arrival, inmates are categorized by crime, traits, and abilities and sent to the building with the guards best suited to deal with them. As a result of this system, many buildings contain inmates - and guards - with similar traits, and each one has its own methods of educating and rehabilitating the inmates in order for them to rejoin society.[3]

For example, building five is "full of prideful guys" and specializes in training and discipline, with a schedule that focuses almost entirely on exercise.[4] Building three is in charge of education[5] and provides extensive lessons to inmates where they learn, among other things, how to behave with etiquette and receive people as guests with hospitality.[6] Building four puts emphasis on culture[7] and follows a rigid schedule consisting of a morning assembly followed by strict lessons and workshops. Building thirteen contains a hoard of talented escape artists and requires the most powerful guards to keep them in line.[8]

The list of buildings and their general descriptions goes as follows:

Nanba in the daytime 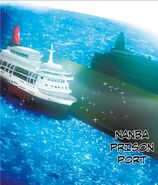 Nanba port
Add a photo to this gallery

Retrieved from "https://nanbaka.fandom.com/wiki/Nanba_Prison?oldid=13215"
Community content is available under CC-BY-SA unless otherwise noted.